April 6, 2013 – three days after my first attempt at soap making, I was ready for more. I woke up early, eager and excited to make a batch before going to work.

I figured out that I probably had a false trace with my first batch, hence the oily sweat.  I only used the stick blender, but did not stir in between.

This time I chose to use Anne L. Watson’s Basic Soap recipe, which is 70% olive oil and 30% coconut oil, to which I added lavender e.o. I used a wire whisk to initially mix the oils and lye before turning to the stick blender. In between blending, I also stirred. I wanted to make sure not to make the same mistake!

After 21 hours, I was able to unmold and cut the soap.  The texture was smooth and even with a few very tiny bubbles, and the color was a creamy yellow.  It cut beautifully like cold (but not too cold) butter. 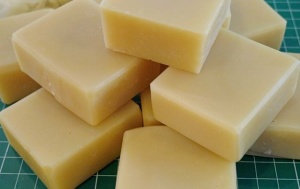 This is a great soap recipe for a beginner.  It gave me the confidence that I could make soap!  When I eventually understood how recipes were formulated, I realized that this has a whopping 10% superfat.  It takes longer to rinse out, but my skin feels soft and moisturized with this soap.  I cured it for just 3 weeks before using.  It melted easily in the shower, but I was too impatient to wait any longer!  A seven to eight week cure should just be perfect.