I can sometimes be very picky with my soaps and this usually means they end up as embeds. I wrote about it here last December 16, but shortly after, I had another batch, called Pear Lily, that I made into embeds. There was nothing wrong with it, but there was nothing special about it either.

I made 2 similar versions with the embeds. For the first one, I kept faithful to the original fragrance blend of Bartlett Pear, Green Tea and Pear, and Lily of the Valley.  I also kept 2 of the 3 original colors.  I really like the way this turned out, and I hope it’s a sign of the way things will be for 2014 since I made it on New Year’s Day. 🙂 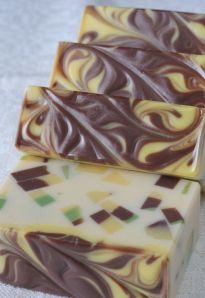 Keeping the pear fragrance theme, I still used Bartlett Pear for the second version, but mixed it with an orange almond fragrance. I think it smells like the delicious French tart called Pear Frangipane.

The yellow and lavender-colored soap below is something I made last December 13 but was not able to blog about, among the many others. The original was one of the rare floral soaps I made – a fragrance combination of Violet, Rose, Patchouli, and Musk. I used glitter for the first time, but after steaming it, it turned into something like grated egg yolk that got wet. I chopped off the swirled tops and cut those into small cubes. I also made bigger cubes from the “topless” bars.

I think the resulting look complements the feminine scent of Sweet Pea and the more sophisticated floral-smelling embeds.  I thought I didn’t like florals but I am starting to appreciate it better.