I am so impressed with the way this rebatch turned out (click here to read about my rebatch adventure.) I unmolded and cut it after 12 hours.  It was still a tad tacky in the middle, but just the perfect consistency for cutting.  However, the leather scent has somehow morphed into something that smells like a swimming pool.  I hope the chlorine smell is just temporary, as I had really high hopes for this manly beer soap. 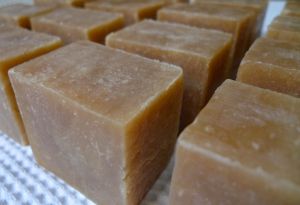 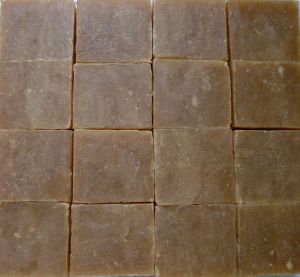 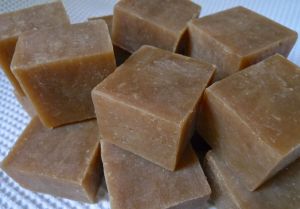 Thank you Soap Queen for your excellent Plastic Baggie Technique!  It really changed my opinion on rebatching.  In fact, I would like to explore it further!

I have been using my beer and egg soap for both body and hair the past couple of weeks. The beer smell has mellowed and it has rounded out very well with the other e.o.’s. I am actually liking the smell, something i could not have imagined when the soap was new.  It is fabulous as a soap – I love the way it lathers and makes my skin feel soft and nourished.  As a shampoo bar, I’d say it is quite decent.  It produces a very rich and thick lather and I haven’t experienced any concerns with my hair. Some people report developing greasy hair. I feel my hair is a tad oily but I may have applied too much argan oil.  I will give it a few more weeks before deciding whether my hair likes it or not.

Since my husband and I are really loving the first beer soap, I decided to experiment with more. I wanted to try a dark beer this time, so I bought a bottle of San Miguel Cerveza Negra. I used a 33% lye solution and the following oils: olive oil, coconut oil, lard, rice bran oil, castor oil and stearic acid.  For a manly scent, I combined leather and citrus fragrances with eucalyptus.

Except for my very first soap, all other dozen or so soaps I’ve made so far have been successful.  Some of the finished products were less than ideal, but at least no mishaps during the soap making process….until last night.

1. When I poured the lye solution into the oils (both around 90˚F-95˚F ), the mixture immediately started to get thick.  As i stirred and blended, it kept on getting thicker and thicker until my stick blender could no longer do its job.  The texture was like very thick mashed potatoes.

2. I was debating whether to put in the fragrances or not.  With the way it was going, I thought the mixture would turn rock hard once I added the fragrances.  As I glanced at the pre-measured fragrances, I noticed that there was a pool of liquid under the plastic measuring cup.  Aaack!  The cup was leaking!  Good thing I placed the cup on top of a flexible chopping mat.  I picked up the mat with the cup and poured all the liquid into the soap. It didn’t become any harder, but boy was it super stiff to stir!

As panic kicked in, I thought if I could just make it softer by melting it a bit…. The mixture was in a large pyrex measuring bowl, so off it went to the microwave. 20 seconds.  Nothing.  My brain somehow started to work again and realized the microwave was not going to be of help, so I just scooped out the lumpy soap into the mold. I knew I had to do a rebatch but I was tired and was not going to think about it until the next day.  My consolation was that the fragrance combination smelled sexy and manly!

First thing I did upon waking up was to google “soap rebatch tips”.  After my first rebatch attempt using a crockpot, I hoped I would never have to do it again, but I simply could not let last night’s manly beer soap go to waste.  Of the many rebatch techniques available, I was drawn to Soap Queen’s Plastic Baggie Technique.

Because the soap was still soft, I just sliced it up into thin pieces using a bench scraper.  I used 1,250 grams of oils for this batch, so I divided the soap into 2 freezer bags.  I added around 40 ml of water to each bag (I think I could have used less since the soap was soft).  I dropped the bags into the pot of boiling water and every few minutes, I would lift out a bag to massage it so that the soap melted evenly.  I was really thrilled to see that the soap became a homogeneous mass of jelly-like consistency. 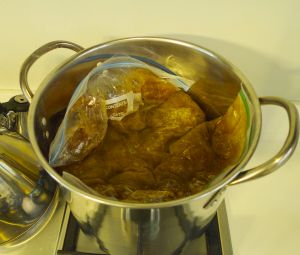 Melting soap in a pot of boiling water.

I had to work quickly with pouring the melted soap into the mold because the surface started to set and become opaque, especially as I tried to spread it out.

After reading all the good things about beer in soap, I naturally wanted to make my own. I was already fantasizing that this would be my pièce de résistance.  The timing could not have been better.  My new acrylic mold had just arrived.

I originally did not plan on scenting this soap, except for the rosemary I had air-dried more than a month ago.  I only had lavender, peppermint and eucalyptus e.o.’s – not exactly a good beer match, in my opinion.  If I had a choice, I would have used something fresh and citrusy, or something manly like leather or tobacco.

As  expected, the beer and lye solution smelled nasty.  I read that the smell eventually goes away, but I did not have full faith that it would, so at the last minute, I added 15 ml of each e.o. I had on hand.

I increased the liquid percentage for this batch because I did not want to waste the beer.  It reached light-medium trace quickly but did not get much thicker even after I added the rosemary and essential oils.  It behaved very well and gave me plenty of time to mix thoroughly.

Twenty six hours later and with much anticipation, I was able to easily slide off the acrylic mold from the soap.  My heart dropped a little when I touched the surface moisture and it was oil. I am 99.9% sure I mixed it properly.  Could it be from the acrylic cover I placed directly on the surface of the soap? Maybe it couldn’t breathe? Was I supposed to let it breathe? Maybe it needed time alone…. 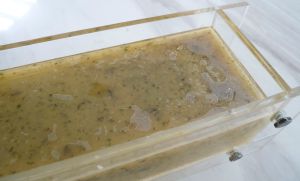 It looks like there is a pool of oil, but it’s partly air pockets.

The following morning, I was a bit relieved to see that more than half of the oily sweat had been reabsorbed. Maybe 45 ml of e.o. was too much for 800 grams of oil, not to mention there’s the fat from the yolk, on top of the 5% lye discount??? This loaf was a bit on the soft side but sliced beautifully.  Fortunately, the oil was limited to the surface of the soap, and no pockets were to be found in the middle.  Even with all the e.o’s, I could still smell the beer – not a very pleasant scent combination.

It has already been a couple of weeks, and so far so good.  The beer smell is definitely a lot fainter. 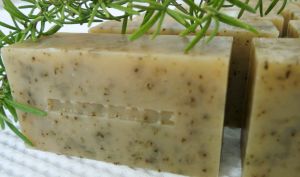 Beer & Egg Soap
This is my first time to use sodium lactate.  I could not find it anywhere, until I was able to persuade a soap manufacturer to sell me some.  Even then it took them a few weeks to sell to me because they had to find a small container that was compliant with their standards. Right now I can’t tell if the sodium lactate has made any difference.