My love affair with the tilted tiger stripe all began with Diva Soap‘s Savanna. Ironically, Maja was avoiding a tilted tiger, so with her usual panache, she came up with something all her own – a cross between a modified tiger and a zebra swirl.

I had never tried the modified tiger stripe before, but the tilting action Maja described in her comments section intrigued me. After my first try, I was hooked! October’s Soap Challenge Club, featuring a similar technique – the Dandelion Zebra Swirl – provided a temporary interruption and a good comparison.  I felt that the results of both techniques were very close (click here to see if you can tell the difference).  I seem to have better luck with the tilted tiger and I find that it is less messy to work with.

I used Black Raspberry and Vanilla for my first tilted tiger stripe.  It was also my first time to use BRV. I lucked out because it was so well-behaved.  It smells like grape and cassis, but I can’t pick up the vanilla, so I’m renaming it Black Currant. 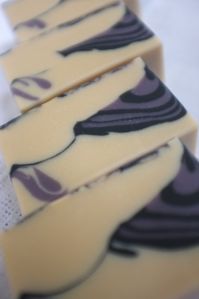 I love the way the stripes and the purple came out! It was my first successful purple after many failed attempts. I would probably still be stuck in my color rut (here and here) if it weren’t for Amy Warden’s post, Coloring Your Cold Process Soap. 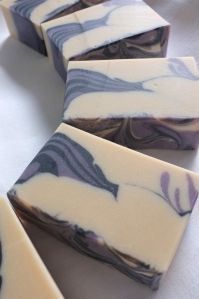 Still scented with BRV, here is a variation I made by swirling the stripes with a chopstick:

And another BRV, with tilted pink stripes and normal purple tiger stripes: 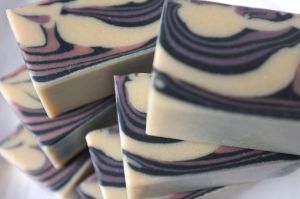 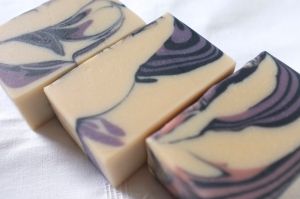 Giving BRV a rest, I made a tiger-looking soap scented with Orange Chili Pepper: 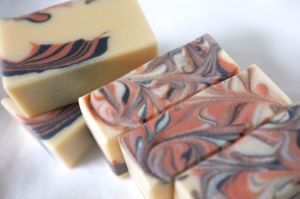 Next, I wanted to try out Cucumber Wasabi.  Just like BRV and Orange Chili Pepper, it behaved perfectly. I love green scents but this one smells too much like a vegetable.  It makes me a bit sad that this beauty smells weird – not bad, just weird – and has pimples! I think though that it would work well in a blend. 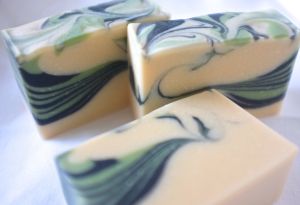 I went ahead and blended Cucumber Wasabi with some Orange Chili Pepper. It smells better, but I should cut down further on the Cucumber Wasabi. I tried to do what Maja did – tilt, pour some of the base soap followed by alternating half of the colored batter, turn around the mold, tilt again, then finish pouring alternately the rest of the soap batter.

I have moved on from my tilted tiger stripe addiction but I know I will be back for more.  Is there a technique you are addicted to? 🙂

Before I left for Taipei last week, I made 2 attempts at the Dandelion Zebra Swirl.

For my first attempt, I really like the color combination, but the soap thickened up a bit that’s why I didn’t get smooth clean zebra stripes. For the scent, I mixed Black Raspberry & Vanilla and Tangerine F.O.s – a really yummy combination!

My second attempt does not even look like a Dandelion Zebra swirl! I used peppermint e.o. and a new fragrance called Fall Festival – a sweet and spicy scent – and it really accelerated trace.  The soap batter barely slid down the board, more like a glop-glop, and when I was about to remove the board, it had already stuck to the soap batter. I had to yank it out and give the soap mold a good dose of hard banging. I am actually surprised that it does not have a lot of holes.

When I got back from my trip the other day, I quickly made another attempt. I used [Capri Olivo] – correction: the name of the fragrance is OMG Olive – another new f.o. (I know I should not use new f.o.s for multi-colored soaps but I kinda like the thrill 🙂 ).  It is a fresh, unisex, and spa-like fragrance. At a usage rate of 4% of my oils, the scent almost completely disappeared, but being the optimist, I am hoping it will come back! It is a very well-behaved f.o., allowing the soap to slide down with ease.

I actually prefer the colors of my first attempt, but my third attempt shows the Dandelion Zebra Swirl technique better, so it is what I will be submitting for the contest.  What do you think?

October’s technique for the Soap Challenge Club is the Dandelion Zebra Swirl, created by the über talented Vinvela Ebony, author of the Dandelion SeiFee blog.

What makes the Dandelion Zebra Swirl unique is the use of a board that acts as a divider and as a “slide” for the zebra stripes that results in a suspended look.

Before I signed up for this month’s soap challenge, I was inspired to make a simpler version of the tilting technique described by Maja of Diva Soap in the comment section of her post,  Savanna  (in response to Kirppu’s query). A few days later, I signed up for October’s soap challenge and proceeded to follow the tutorial given by Amy Warden. When I looked at the results, I felt it was hard to differentiate which soap used which technique.

Here are three soaps I made and one did not use a board to achieve the stripes. Can you tell which one it is? 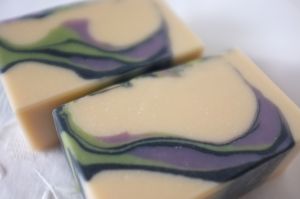