I have made oatmeal & honey and oatmeal & milk soaps, but never the OMH trinity.  Since I have a lot of yogurt and I am on a yogurt soap ride, I decided to make an OYH instead of the classic OMH.  I also don’t have OMH fragrance, something that seems to be a staple in most people’s f.o. collection, so I just concocted my own blend of lavender, lemongrass, neroli and honey.  I know it sounds confusing but the result is actually very nice, light and fresh.

My husband just gave me his old Fuji X100 (love you! 🙂 ) Wow, I am just having a blast using it!  I have always enjoyed taking photos for my blog, but with my old point and shoot, sometimes it was really a challenge especially when it’s dark and grey outside.  With the “new” camera, I am inspired to take photos more than ever.  The weather too has been very cooperative! 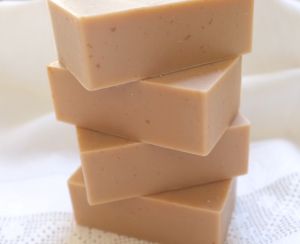 Homemade yogurt and OYH on top of plain yogurt soaps.

OYH and plain yogurt soap, side by side, up close.

I love my scrubby coffee oatmeal soap so much that I am making it again, not just once, but twice, using different techniques that are new to me. I used exactly the same recipe, except for the espresso coffee grounds that I reduced to 15 grams from 20.  I find that the finer espresso grind is better suited to use in soaps than the coarser french press grind that I used for my coffee kitchen hand soap.

For the first batch, I used the tiger stripe technique.  I had less coffee than oatmeal batter, so the stripes did not reach all the way to the top.  Nonetheless, I was thrilled to see the stripes! 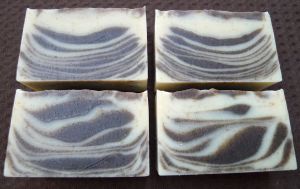 For the second batch, I was inspired by Bonnie Bath Blog’s tutorial and Sunday Spotlight on the spoon swirl.  My result does not show swirls, more like spots or dollops, but I had fun doing it (actually, it does not matter what I’m making, I always have fun when making soap 🙂 ) and would definitely try it again. 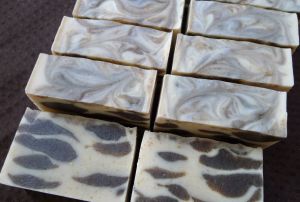 These soaps smell very similar to my Honey Sunrise, except that these don’t have honey f.o., therefore not as sweet smelling, but oh so good!

When I just started making soap, I gave my mother-in-law some of the stuff I made, and one of them was a chrysanthemum-shaped unscented oatmeal and milk soap. Because she was so enamored by the design, I made a new batch for her, this time with her favorite scent, lavender. I adjusted the recipe by using olive oil, coconut oil, palm oil, castor oil, cocoa butter and grapeseed oil. I also used powdered milk to see if it makes a difference from using fresh milk.

I actually wanted to gel this soap (I don’t mind a darker color), so I covered it with a box and draped a thick towel over it. It didn’t happen, but instead, I got a beautiful creamy white color. After 3 days, the soaps would not release cleanly from the silicone mold, so I had to freeze them for an hour before I got to unmold them perfectly.

Strangely, this smells like chocolate orange biscotti, even though I used lavender and grapefruit for the oatmeal part, and vanilla for the coffee part. Not quite what I expected, but I love the way it smells strong and yummy! 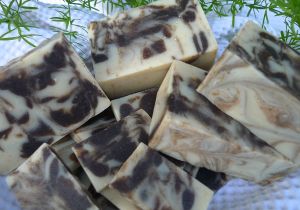 I used 900 grams of fats (olive, coconut, palm, cocoa butter and castor) with a 4% lye discount and 35% lye concentration. I mixed 20 grams coffee grounds  (used-from making espresso) and 15 grams vanilla to 1/3 of the soap mixture, and to the rest I added 10 grams ground oatmeal, 1/2 tsp titanium dioxide, 15 grams lavender and 15 grams grapefruit.  The coffee part experienced a bit of trace acceleration, but the oatmeal part behaved very well. I would like to do this recipe again and create a better looking swirl pattern!

This is my second batch of soaps, made about a month ago.  By that time, I had a better understanding of soapmaking.  I made these formulations with less water (33% lye concentration) and a lye discount of no more than 5%.  Actually, it bothers me that I can’t be very accurate with the lye discount because the SAP values available on the internet are simply averages.  For now, I will have to live with this and pray that my lye discount is not very far from the actual one.

1.  Honey Cocoa Butter (Unscented) – I made this with olive oil, coconut oil, palm oil, cocoa butter, castor oil, and honey. I mixed the honey into the oils, but I think I should have thinned it out with a little warm water before adding it to the oils.  With 10% cocoa butter, I expected this soap to be harder than the rest from this batch, but it’s the opposite. I suspect it’s because I did not insulate this due to the honey. I will give it 2 more weeks (or a 6-week cure) before using. It has a nice chocolate smell. 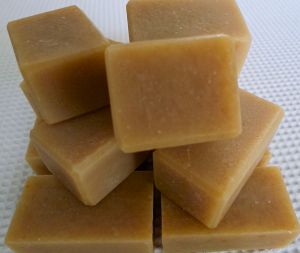 2.  Charcoal and Oatmeal – I wanted to make a swirl pattern, but ended up with this instead.  I could not wait and started using a bar after just two and a half weeks of cure.  It has held up remarkably well.  I can imagine some might find this soap too rough or scrubby, but I like it.  I added the oatmeal and charcoal at trace, alongside the lavender and peppermint respectively.  The color of the charcoal bleeds into the suds (I used 1 Tbsp or 4 grams charcoal for 500 grams soap mixture), something I did not encounter with a previous charcoal soap. I think 1 to 2 tsp charcoal p.p.o. should work fine.  This is made with olive, coconut, palm and castor oils. 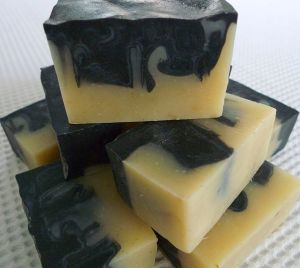 3. “Ambitious” soap – With my limited soapmaking skills, I only intended to use 2 colors, but at the last minute, I became ambitious and gunned for 3 (titanium dioxide, charcoal, and annatto seed powder). When I added in the essential oils (peppermint and lavender) and the colors, the soap mixtures became very thick.  I panicked and quickly plopped the mixtures alternately into the mold. It is not the prettiest sight, but the soap itself is quite decent.  I used it after 3 weeks of cure.  It is a hard bar of soap with good lather, but the scent is like a distant memory.  It is made with rice bran oil, coconut oil, palm oil and cocoa butter.

4.  Green Velvet – I am at a loss what to name this soap, but for now, let’s just call it green velvet because I like the sound of it. The photo does not pick up the green tinge, but it’s there. The green is from the pili pulp oil. Pili is a fruit that comes from the same tree as Manila elimi.  The pili kernel is usually prepared as a candied nut and is considered a delicacy in the Philippines. It has a very high fat content with its own delicious unique taste. Yum!  Oil can be pressed from the nut and from the pulp of the fruit. These oils are kinda scarce.  I had to order mine from a producer in Sorsogon, a province where pili is indigenous.  I wanted to get the pili kernel oil but I almost fell off my chair when i heard the price.  I settled for the pili pulp oil, more affordable, but still not cheap!  For this soap, I used the following: olive oil, coconut oil, rice bran oil, pili oil, cocoa butter, beeswax, kaolin clay and lavender.  I had to mix at a higher temperature so that the beeswax (melted over a pot of boiling water, not the microwave) would stay liquid.  This traced very fast and became quite thick.  I started using this the other day and I simply love it!  It is a relatively low-lathering soap but it has a silky/velvety feel to it.

After making my first successful soap, I was hooked!  That weekend, I went soap-crazy and made these:

1. Oatmeal and milk – I repeated Anne L. Watson’s formula, but substituted the water with frozen whole milk, and added old fashioned oats that I pulverized using my coffee/spice grinder. I just left this on my kitchen table, uncovered, to complete saponification. I was able to pop them out from their silicone mold only after 5 days. Even then, they were still a tad soft. I left this unscented and the smell of the oatmeal really came through. Used this after 4 weeks. It is a good moisturizing and exfoliating soap, but has a tendency to become soft.

2. “Master Batch Basic Soap” recipe from Gregory Lee White’s book – contains vegetable shortening, coconut oil and olive oil.  I made this in my shoebox mold, covered, but not insulated. Of all the soaps I made from my first week of soap making, this produced the palest and hardest bar. Weeks after I made this, I found out that the shortening I used was made from coconut oil, not the usual soybean or cottonseed or palm oil that is normally used in the States.  Given this fact, the soap actually has a 13% superfat, instead of the intended 5%! It’s a nice soap to use, has great lather, and remains hard in the shower. The only downside is that it leaves a residual laundry bar scent even though it smells wonderfully of lavender and eucalyptus as is. It must be because of the high coconut oil content that reminds us, from this part of the world, of Perla, a popular laundry bar made with coconut oil. 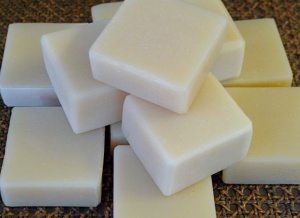 Wrapped up and ready to be given to family and friends… 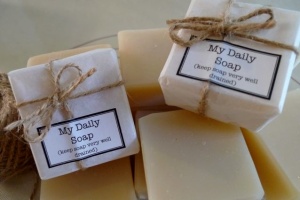 3. Green Tea and Tea Tree – made with olive oil, vegetable shortening, coconut oil and sesame oil. I replaced the water with brewed green tea and added green tea leaves that I ran through my spice grinder. Because this was not insulated and in small individual molds, I had a hard time removing the soaps from their silicone mold. Still soft after 5 days, I had to freeze them for an hour so they could be unmolded. My husband likes the exfoliating quality of this soap. I like it too but I wish it were harder and smelled stronger of tea tree. 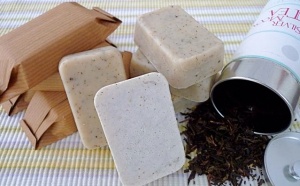 4. Activated Charcoal – I have no photo of this. I used the same mini mold as the green tea and tea tree, and encountered the same problem with the soap not setting up properly. This was made with olive oil, coconut oil, castor oil, and peppermint oil.

Lesson learned from my soap marathon weekend? Aim to gel, or at least whenever possible.