Nowadays, when I am making soap, I don’t think about soda ash anymore.  I have taken a zen approach to it: if it’s there, then it’s there; if it’s not, then well and great.  But previously, I was really on the hunt on how to avoid it. I tried all sorts of tips gathered from books and the internet: from using beeswax, to spraying with alcohol, to covering the soap surface, to steaming. From my experience, beeswax does not guarantee a soda ash-free soap; the same goes for spraying with alcohol. Covering the surface works, but it can leave crease marks and air pockets; steaming works too but it is time consuming and a bit dangerous to hold a soap bar over a steaming kettle.  I’ve also tried holding an entire loaf over steaming water. Some of the ash came back after a few days, but it could be that the soap was getting slippery so i did not get to steam it long enough.

Last June, after making a batch of soap that had soda ash, it started to rain.  The following day, I noticed that the ash had disappeared and the soap was a bit moist from the high humidity. This gave me the idea to place a “tent” (using an inverted container) over the soap, together with a bowl of hot water, to trap the steam. So far, I’ve found this to be the most efficient and effective way of removing soda ash.  For bigger batches, this can be done in an oven or in any enclosed space for that matter.

Here is a batch of ashy lemongrass verbena soap that I steamed this afternoon.  While it was steaming, I took pictures of my other soaps.  I estimate that I left it to steam for around 20-25 minutes. 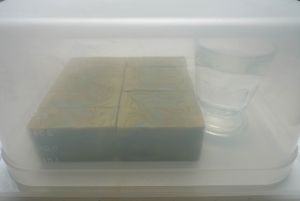 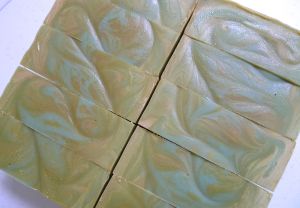 Soap right after steaming. This is another one of my colour-challenged soaps 🙂

Here’s another batch I steamed: